Preface
I didn't make a big announcement of it when I got it, but I've had a Paul Busman whistle in my hot little hands for a couple weeks. If you look at the picture on Paul's website, the whistle I now own is the 2nd from the right in that photo. While it doesn't affect playability, it's kinda neat to think that everyone who owns a Busman whistle has a picture of mine on their instructional literature. ;) Obviously, the whistle came to me second-hand, which is how I get the majority of my high-end whistles.

It took me a while to write this review, because even though it was a second-hand whistle, I treated it as if it were new, giving it standard new-wood-whistle oiling and limited playing break-in period. I figured it was safest to do this, as I had no idea how travelling through the mail affected the whistle's water/oil balance.

The whistle construction looks a whole heck of a lot like a Thin Weasel (no surprise there...most will recall that Paul learned the craft from Glen). Because of this, I will offer comparisons between the two as they strike me.

I've played the whistle outside, played it at sessions, and played it at a gig. For the last 2 months, my "reach for" whistle (Burke Al-Pro) had been missing, so I've been giving equal time to this whistle and my Copeland brass D.

I'm posting my review in the usual format. I didn't invent this format, but I find it a good one for whistle reviews. If I could remember where I first saw it, I'd give credit where credit was due.

Appearance
This whistle is gorgeous. I'm a fan of the look of wooden whistles in general, but I love the patterns on this one in particular. Not only has Paul picked a beautiful cut of wood, but he has taken the time and attention to detail to ensure the grain on the mouthpiece lines up with the grain on the body, making an overall striking effect. 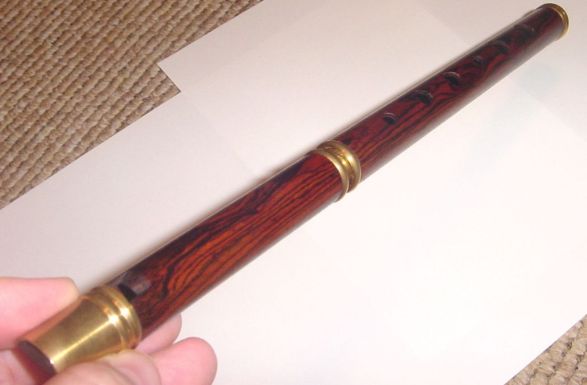 Here's an overall view of the whistle. I love the complex look of the tight grain pattern, and how the grain pattern of the mouthpiece lines up with the grain on the whistle body, making it obvious that this whistle was made from a single piece of wood. The bocote wood is a nice orange-ish brown in this light, but you can see that as the whistle moves away from the birght light source (see end of whistle) it begins looking more like an olive brown. In bright sunlight this whistle is quite bright and cheery. In subdued lighting, it takes on a more serious tone. Kind of makes it a good whistle for many occasions!

Here's a shot of the head, showing the short-beaked mouthpiece, the tuning slide, and labium ramp. Unlike a weasel, this has brass fittings. Glen only offers stainless fittings on the Weasel, according to his website. A whistler at our local session who exclusively plays Weasels was quite floored when I brought in what looked like a weasel with gold-colored fittings. I had polished the brass (carefully using a jeweler's cloth), but it's already starting to get a patina. 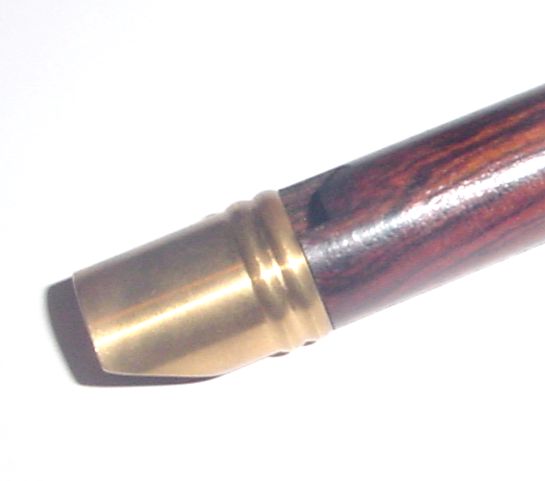 In the above close-up, I tried to get a good pic of the labium ramp, though the color of the whistle made it difficult. The labium ramp on this whistle is also substantially shorter than the ramp on the Weasel I compared it to, I suspect that this accounts for the majority of playing differences I'll note below.

Here's a closeup of the whistle body, which also shows the grain patterns and bright festive color it turns when under bright lighting conditions. The tone holes are medium-sized, well spaced, and are not chamfered.

Playing Characteristics
This whistle is woodsy with a tight burst of chiff. Larry Mallette (the whistler with the Weasel's mentioned above) thought the Busman had a vastly different tone than the Weasel. We played the same tune together at the same time (though I don't recall which) and personally thought the two sounded more alike than different. In recordings, it would be easy for me to pick a weasel out from a Silkstone PVC and a Sweetone, for instance. I'm not convinced I could do the same with a Weasel and Busman.
Video clips of the whistle:

Volume: This whistle plays on the medium side. The second octave is quite a bit louder than the first, but over all, this whistle is much quieter than a Weasel, and is similar in volume to the Acorn, Walton's and Feadan I pitted it against. Larry Mallette prefers the much louder Weasel. A number of folks, myself included, will prefer a more "blending" instrument in session, though this whistle would probably be a bit lost in a truly loud session. This whistle's definitely louder than a Burke Al-Pro. At gigs, the volume really doesn't matter that much since we're amped 99% of the time, and I can always account for an individual whistle's volume.

Responsiveness: This whistle is highly responsive. I had absolutely no trouble at all with this whistle coming up to speed on any of the notes, including the bell note. The ornaments were crisp, and any mushiness I attribute entirely to my own playing. On some whistles, it may take a micro-second for some notes (esp. the bell note) to smooth out...not so on the Busman.

Tuning: The instrument, when blown with the proper breath control, is in tune. There's a bit of a breath-pressure gap between E and F#--taking a bigger jump in breath pressure than from D to E or from F# to G--but it's only slight. One would easily adjust their playing style to this as they grew into the whistle. My only complaint about this whistle's tuning is the same complaint I had about the Weasel. The tuning slide is not firm. I'm not sure what Paul (and Glen) use on the inside of the whistle for grippage, but when I play the whistle, I tend to push the tuning slide closed a little bit when I play more aggressive tunes, sharpening the thing up as I play it.

On the Weasel, I fixed this with a turn of teflon tape, and will likely employ the same approach here. It does mean I have to take greater care with tuning this whistle than whistles that incorporate rubber O-rings (Burke, Susato, etc), since once those are set, they tend stay put better. Speaking of the tuning slide, when the whistle is all the way closed, the tuning is about 45 cents sharp, a good thing. All the way open, it's 20 cents flat...of the next lower semi-tone! That's a lot of range!

C-natural: OXXOOO produces a flat C-natural (-15-20 cents or so on this whistle) with the expected breath requirements. Blowing harder will bring it into tune. OXOOOO on the other hand, produces a C-Natural that's more centered in the breathing range, and easier to push sharper or flatter with the breath.

Hole size and placement: This whistle has holes are medium-sized. I wouldn't expect most people to have problems with hole size or placement.

Air volume requirements: Average. I didn't note that this whistle took any special amount of air to keep playing. I didn't run out of breath especially soon, nor was I able to play for especially long periods between breaths. It's a solid average in this regard.

Air pressure requirements: Slight side of medium. This is less than my Weasel took. The Weasel required playing with a lot more aggression and confidence, especially in the second octave. The Busman requires less from the whistler in this regard, but I would guess that this is also why the whistle is a bit quieter. There is a small but satisfying amount of back pressure that lets you lean into the whistle a bit.

Clogging: Like the Weasel, the Busman has a very narrow-heighted windway. It's curved, which helps dribble moisture away, but like most narrow-windway instruments, the slightest amount of clogging is detrimental to this whistle. I haven't yet Jet-Dried this whistle, probably because it's wood, and I tend to be more gun-shy about that kind of thing than with aluminum. I think I'll wait until I get some AntiCondens, which I know is made for woodwinds, and see what the packaging says. Because of that, the Busman got only limited use at my last gig.

Wind Resistance: This whistle does not like wind. Some whistles are excellent outdoors whistles (my Silkstones, my Sweetheart, and my Copeland, for instance). This isn't one of them. The slightest cross wind cuts this whistle out, and I find myself constantly doing the "wind dance" when playing this whistle outdoors. As a concequence, I probably won't be playing it at the Renaissance Festival this year, though I'd love to.

Summary
Excellent whistles. I'd prefer a tighter tuning slide, and a OXXOOO C-natural, but since it's easy to make a C-natural without half-holing, these aren't deal killers. Being spot on in tuning, with no surprises in volume and playing characteristics, as well as having a nice complex tone makes this a very satisfying whistle indeed. The fact that it's aboslutely gorgeous simply adds to the enjoyment. I prefer this whistle to the Thin Weasel I owned, because the Weasel required more aggression than I like.