I've owned this whistle for quite a while. Since 2015 to be precise. When I first got the whistle, Mitch's books were closed to new orders, so I didn't work up a review because I didn't want to spike any demand for the whistle if Mitch couldn't fulfill the orders.

I've owned an Oz whistle once before, back in 2008, when I purchased a whistle that Mitch had out on "tour" (loaning the whistle to a number of people for impressions/reviews). While that one was a great whistle, Mtich has really perfected the craft in the intervening years.

Please note that this is an African blackwood whistle, which Mitch no longer supplies due to African Blackwood being named an endangered species. 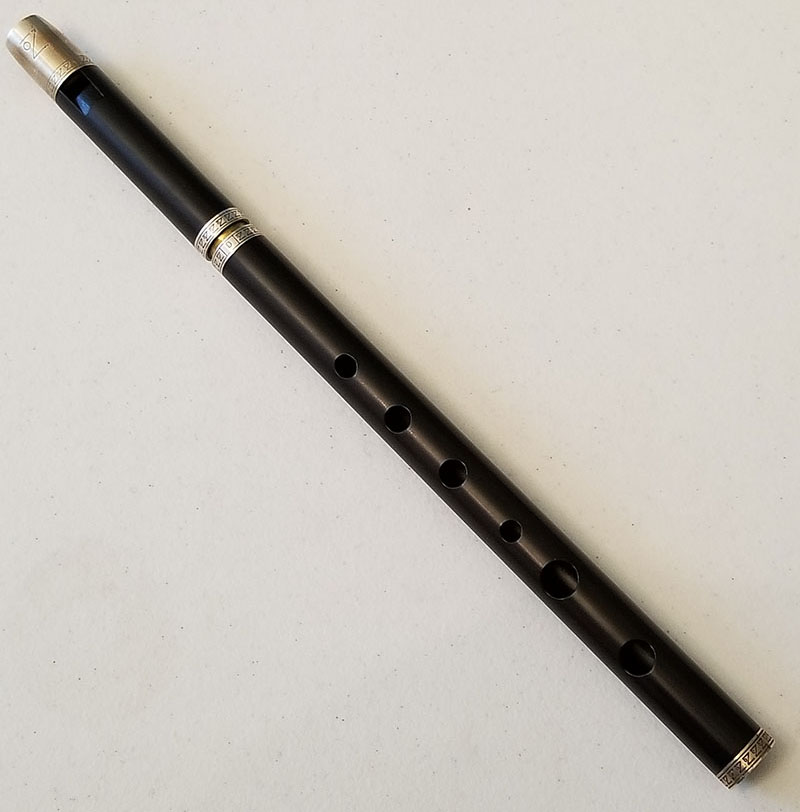 Here's a shot of the full whistle. It's extremely well made, with no blemishes, pits, or tear-outs in the wood. The blackwood is smooth and polished, and really the only way I can tell that this is a wood whistle (as opposed to say, acetal) is the smell and the sound it makes when I tap it with my fingernails. It's a precision crafted instrument! 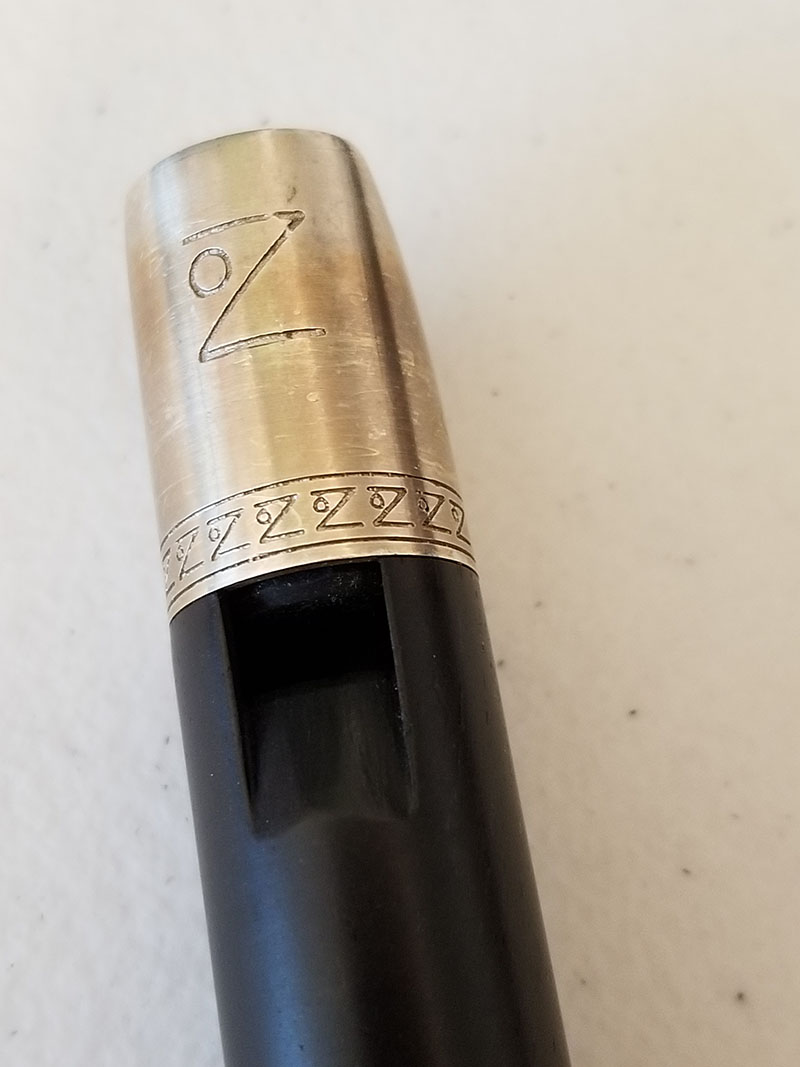 Here is the mouthpiece of the whistle.The labium ramp shows signs of hand tooling, and the sterling silver mouthpiece is starting to tarnish a bit. After many years, I've finally given up on polishing these things, and I've come to regard the tarnish as a sign of a well-played whistle. 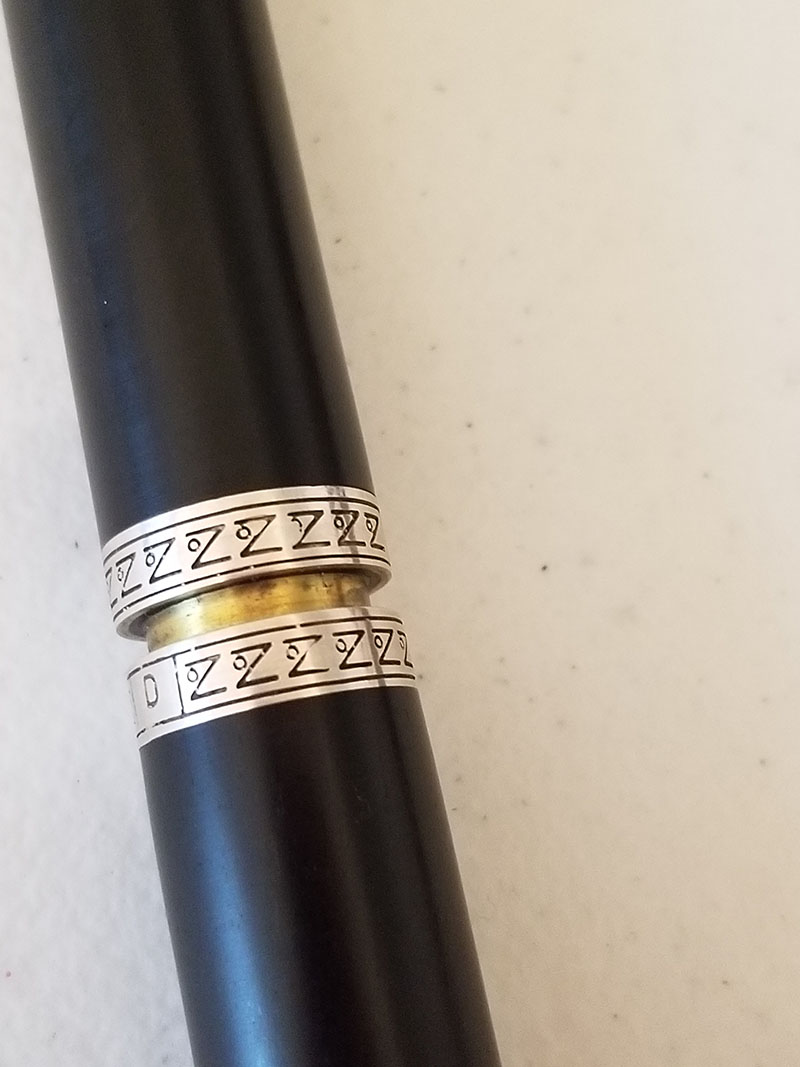 The ferrules on the tuning slide look pretty snazzy with the Oz logo on there, I think. 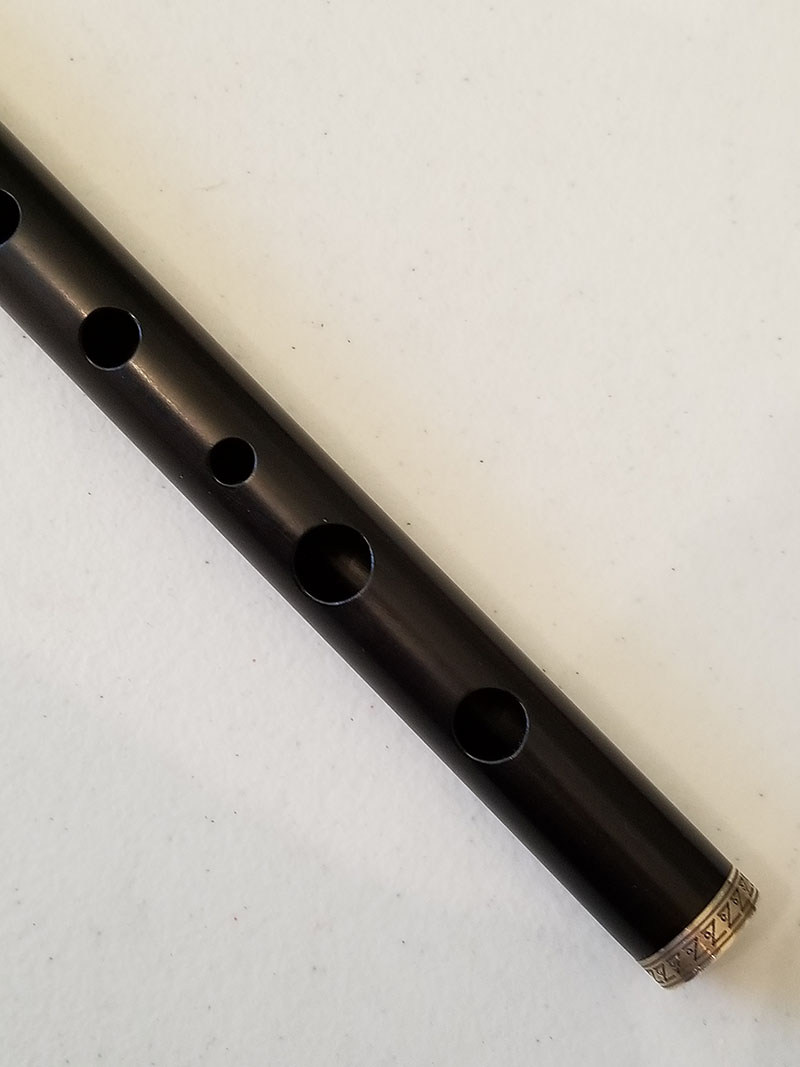 The bottom of the whistle shows the last ferrule, and the last few holes. Like many whistles, the Oz whistle has the E and F# hols a little closer together, and the F# hole is notably smaller than the rest. It's a fairly standard configuration, and the holes aren't so close together that my fingers have to touch each other to play.

Tone: The Oz whistle has a bit of complex chiffiness that I enjoy. There's a crisp little start of note chiff when you tongue the whistle, and a bit of airy tone chiff throughout the note. It reminds a little of the Clarke original, but dialed back a notch. It's a great sound.

Volume: Louder than average. I'd put this one on par with a Susato, perhaps, in terms of loudness. When my Abell isn't being heard at my local session, I'll pull out the Vambrace first to see if it can be heard, before moving to some of my loudest whistles in my collection if necessary.

Responsiveness: Agile. Some whistles with start of note chiff can feel muddled if you're playing quickly or making speedy ornaments before the note can fully resolve. I didn't have this issue at all with the Vambrace. This whistle takes everything I can throw at it.

Tuning: This whistle is in tune with itself with a steady increase in breath pressure all the way up the scale across both octaves. The jump between the second octave and first octave is smooth without a large breath difference between 1st octave c and 2nd octave D. One thing to note: If you play 2nd octave D with the top hole vented, the whistle does play a bit sharp (about 10-15 cents), but plays perfectly with all holes closed. The tuning slide works well. All the way closed, the whistle is about 20 cents sharp, and all the way open is about 50 cents flat.

Hole size and placement: The holes are centered, and well-rounded. This whistle has the standard configuration of a slightly smaller F# hole and slightly larger E hole, with the two closer together than the other holes. It's a pretty standard hole configuration for whistles. While I've had some whistles where the E and F# holes were so close my fingers would rub on each other, that's not the case for this whistle.

Air volume requirements: Lower than average, which is kind of surprising due to its volume. I pitted this against my inexpensive Oak whistle, just to be sure, and I can get a few more notes out of the Vambrace before needing a breath.

Air pressure requirements: Slightly higher than average, going up as you go up the scale. The top half of the second octave requires a bit more push than the Oak I compared it against, but you don't have to push really hard to make those notes. Just a bit harder than most inexpensive whistles.

Clogging: Very good. I haven't treated this whistle with soap or duponol, but it's never clogged on me, which is nice.

Wind Resistance: Poor. I played this one outside with a steady moderate breeze crosswind, and it completely cut out the whistle. You'll definitely need to turn your back to the wind, or try turning the fipple backwards, or whatever other standard tricks you've worked up to deal with wind.

Summary
The Oz Vambrace is a commanding whistle. Louder than average, with a nice complex tone and a bit of backpressure you can really lean into. It doesn't hurt that it's visually stunning, as well. This whistle really ticks all of my boxes in what I love about handcrafted instruments.