Preface
Though I didn't know it at the time, it was an Abell whistle that got me interested in whistling back in 1993. My girlfriend at the time was friends with a guy in a local folk band--Jay Lee of The Flying Fish Sailors. They played Irish stuff, but not exclusively. Their most popular tunes were original compositions full of silliness and irreverence. After going to a few shows, and seeing them at the Texas Renaissance Festival, I became completely enamored by Joe Limbeck's playing of the tinwhistle. The guitar was nice, and the fiddle cool, but I was obsessed with the sound of the tinwhistle. I just had to have one!

My girlfriend didn't really know Joe, so it was with some shyness that I approached him at a show and asked him what he was playing. His answer "It's expensive." That, and he offered to get me the address of the guy who made them. That was the last I heard from Joe--well, we did talk again in 2004 when he tracked me to down to get a closer look at my Chieftain New Range low D, which he loved the sound of, but that's a different story. To be fair, having worked at TRF myself, he was probably extremely busy and just forgot.

My girlfriend eventually got tired of hearing me whine about wanting to know what that instrument was and obsessing over it day and night, so she told me she'd get me one for my birthday. My birthday rolled around, and I became the proud owner of a brand new cream-colored Yamaha recorder! I tried to teach myself how to play it, and gave up after three months. Fast forward to 1995, and I'm lamenting over my failed musical endeavor to a new friend of mine. "Joe doesn't play a recorder!" she tells me. She later shows me a Clarke whistle she has. I'm immediately taken in with the sound, and know it's love.

My friend got me a Clarke of my own for my birthday that year. I eventually ended up breaking up with my girlfriend and marrying the girl that gave me the tinwhistle. The rest, as they say, is history.

It was another 2-3 years before I had learned enough about the different brands of whistles to recognize that Joe plays an Abell.

At a Glance
Whistle Reviewed
Abell Blackwood Soprano D whistle
Models Available
Chris makes whistles in every key from F to low G. Blackwood is Chris Abell's standard wood, but he uses other woods upon request. Chris also makes whistles out of Delrin now.
How Acquired
received secondhand.
Construction
Tunable wood or Delrin with sterling silver metalwork, Delrin fipple.
Price at Time of Review (in US Dollars unless otherwise noted)
$350.00 US
Available From
The Abell Flute company 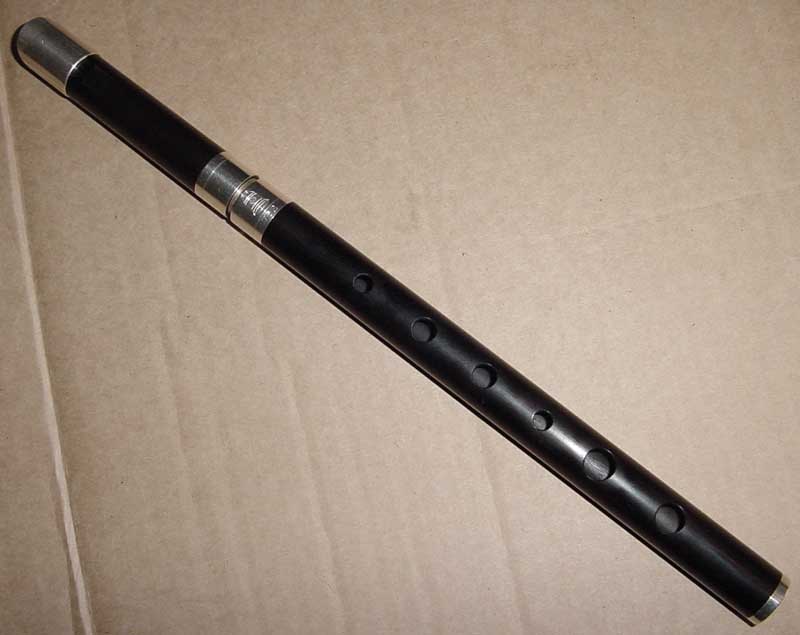 Here's the full whistle. I can't help it; I'm a wood junkie. And blackwood just looks so classy to me. Black and silver is a classic color combination anyway. The whistle itself is extremely well finished. The surface is so smooth you really have to get up on it to see the wood grain. The blackwood itself is extremely black and I see no brown in it at all. 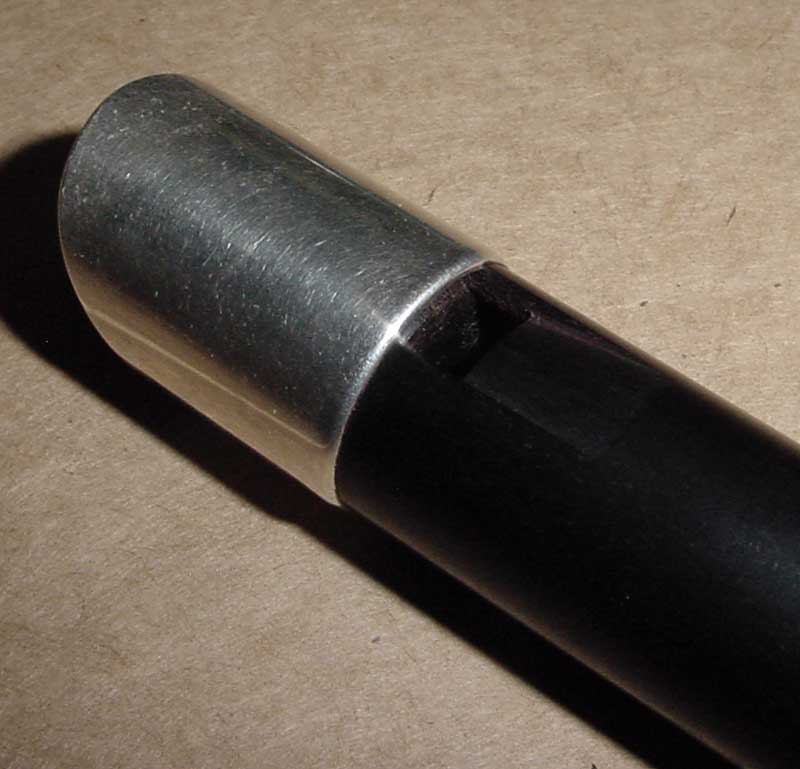 Here's a close-up of the mouthpiece. Because it's so black, it's next to impossible for me to get a good picture of the labium ramp. It's a bit longer and a shallower angle than the Thin Weasel I reviewed, and just as precisely formed. 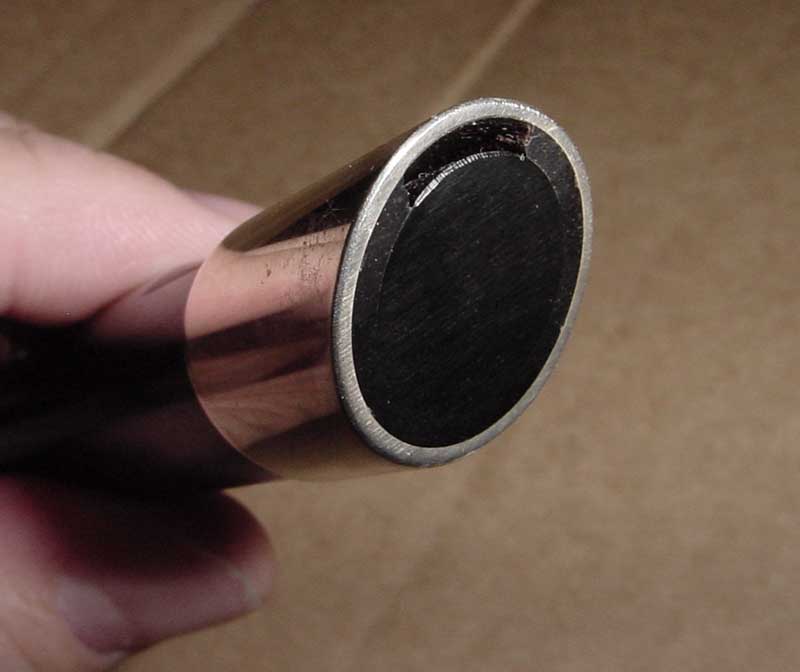 Here's another angle on the mouthpiece, showing the fipple area. If you think Susato whistles are a little stubby, then this one will really throw you for a loop. Abell's don't really have a beak to speak of. The mouthpiece is formed by a cutting a slight angle off the end of the whistle. It took a little getting used to, but I don't really think about it at all now. On a side note, yes that is a reflection of my finger you see in the wood. Talk about a highly-polished finish! Older models used cedar for the fipple, but Chris finds that Delrin is more stable, and looks better overall. 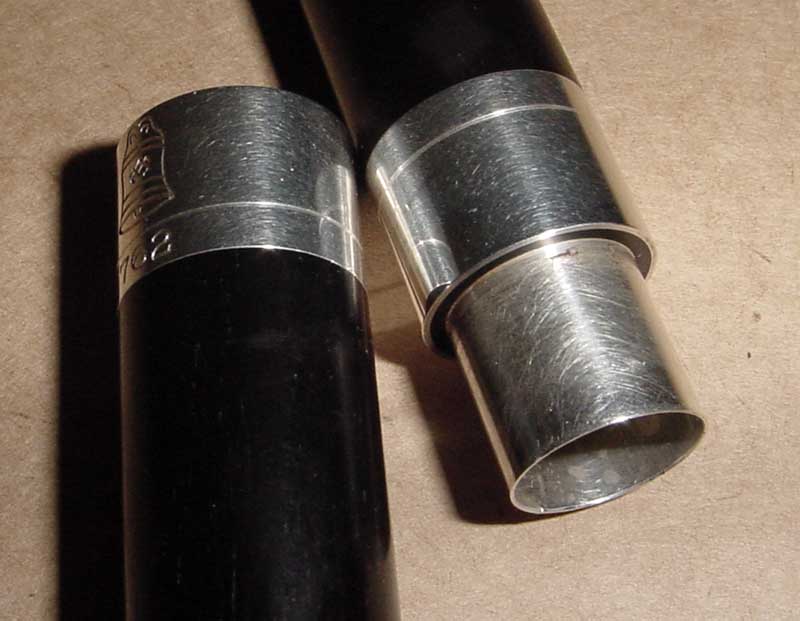 The tuning slide on the Abell appears to be quite short, but it gets the job done. All the way in, it's about 30 cents sharp, and all the way out, it's 60 cents flat. That should be plenty of adjustment for most situations.

The whistle has a neat Bell stamped into the slide, along with the # of manufacture. This whistle is 762. Chris tells me that he's in the 1200's now. This is about where the tuning slide should be for the whistle to be in tune with a=440. 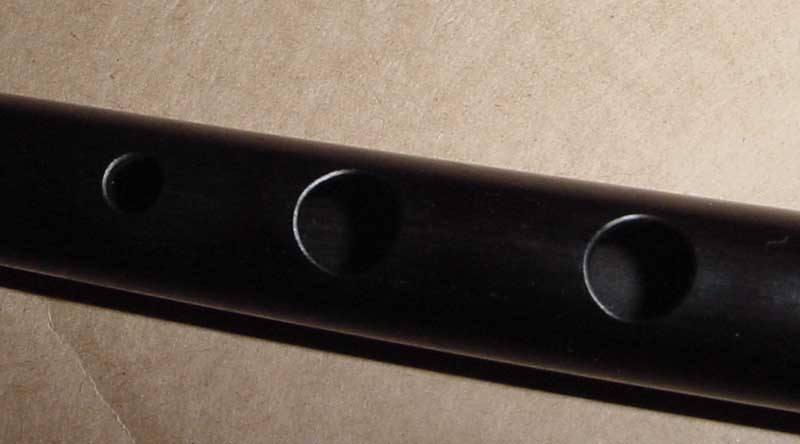 A shot at the end of the whistle, showing the last three holes. 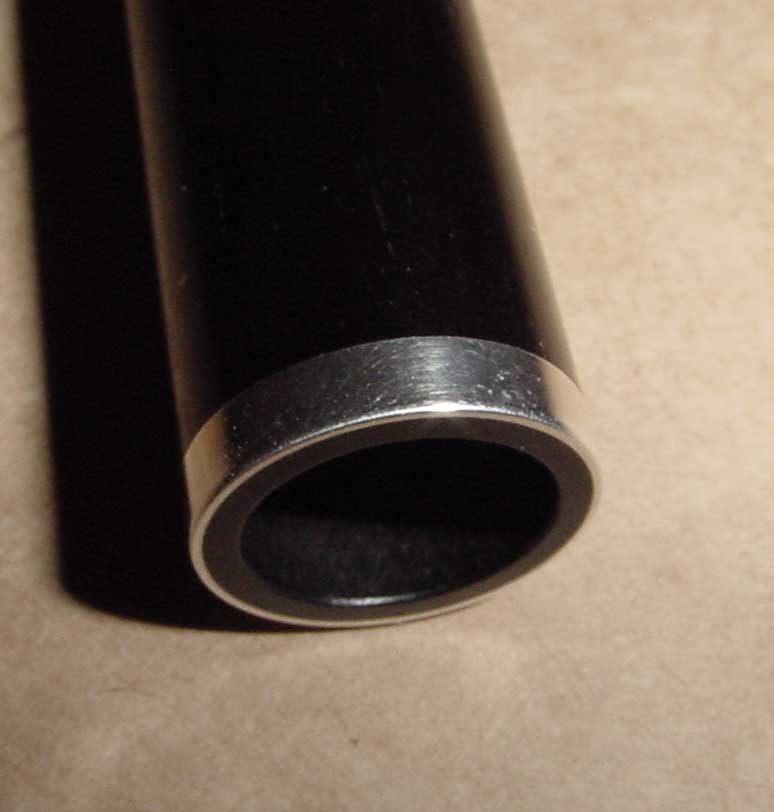 The end of the whistle, so you can get a good look at the decorative ring there, and how well finished everything is.

Tone: This whistle was advertised as "pure" by the person I got it from, but I'm not sure I'd use that word to describe the tone. It's definitely doesn't have that "scratchy" kind of complexity that a Generation, Sindt or Feadog has. It doesn't have a reedy quality either. And it doesn't have much start-of-note chiff. But it definitely has tone chiff throughout it's sound. There's a subtle musical windiness that can be heard, making the sound more complex than purer instruments like the Burke Al-Pro or the Hoover line.

Volume: Loud. This is one of two whistles that I own that can consistently hold it's own un-amplified versus ten other amplified musicians in our Friday session in a rowdy bar. The first octave is louder than a Susato's first octave. But the balance is better; the second octave is quieter than the Susato's second octave.

Responsiveness: Responsive. No issues with muddled-sounding ornamentation even at my fastest speeds.

Tuning: Perfect tuning. There are only a few whistles I've owned so far where the needle on the tuner is this rock-steady: my Burke, my Chieftain NR low D, and this one. Unlike the Burke, it doesn't take special effort to push the note around (+ or - 15-20 cents). And unlike many whistles, wherever you put the tuning with your breath, it just sticks there. This is a very stable whistle!

Air pressure requirements: Slightly above average. This is mostly in the upper end of the second octave. But it really doesn't require lot of push up there. Just a slight bit more than average.

Clogging: In the interest of full disclosure, I've had this whistle for 4 months. A couple of days after I first got it, I put all my whistles through the Duponol treatment. I usually do this a couple times a year, as the mood strikes me. So I can't really tell you how this whistle clogs free of Duponol. With that in mind, after 4 months, the whistle still does not clog at all. I just played it for a half-hour straight, and had the tiniest (like caviar sized) bead of moisture come out when I went to blow it out.

Wind Resistance: Very Good. EJ Jones (of The Rogues) and Joe Limbeck of the Fish (previously mentioned) both have Abells, and I've seen them both playing them at the Texas Renaissance Festival outdoors. I've never heard either of them cut out due to wind. My own stands up really well, too. Loud whistles usually do.

Summary
The Abell is a precision instrument, with spot-on tuning, pure tone with just a hint of chiff. It's pretty loud, so it's really not a "blending" instrument unless you're playing some place that requires ear protection.